Born in Rome, Italy in 1962, Antonello Marafioti, Jazz pianist, composer, sound engineer and music educator began playing piano at 7 years of age. By the time he had turned 20 he had been exposed to Jazz through recordings of Thelonious Monk and John Coltrane. This encounter permanently altered the course of Mr. Marafioti’s musical focus and direction.

He began his professional career in Viareggio, where he spent three years living and playing. This area of Tuscany, Versilia, has always been an important centre for the arts, (due to Carrara marble), and during the time he lived there many jazz musicians also lived and played in this part of Italy. Through the presence of the great jazz saxophonist Fulvio Sisti, (†1988), Versilia had been visited by prominent jazz musicians including the likes of Chet Baker and others of his caliber. These visiting jazz players not only played concerts in Versilia but also spent time together jamming with local musicians.

Around Christmas of 1987 Antonello decided to move to Nuernberg, Germany, where he soon found many fellow jazz musicians to make music with. In 1994, through the urgings of his wife Stephanie, they then moved to Berlin, where they still live and where he makes his musical home.

Arrived in Berlin Antonello devoted himself completely to music and to his little son Davide who always raises in contact with music, also taking him to rehearsals and Jam Session.
Every evening he goes out to attend all the Jam Sessions in the city and almost immediately finds himself taking over the direction of the session at the Ellington, a historic Jazz club in Berlin, where Eric Dolphy played his last concert. He is a regular guest at the Schlot, at the Quasimodo, at the Parkhaus where he conducts the Jam Sessions on Thursdays and at all the Jazz clubs in Berlin. He becomes part of the Cuban music and Latin Jazz scene and founds the InterJazzional© group in which he works on the mixture of the most classic jazz with Caribbean music. He taught for six years at the Jazz and Popular Music Department of the Hanns Eisler University of Music and toured playing piano alone on the Baltic coast. As composer and performer he takes part in the famous movie “Goodbye Lenin” where he places two of his compositions.
With his agency InterJazzional©, which he founded to support all forms of art and their interaction, he organizes a Jazz festival in Bavaria, the Berlin Week at the Villa Celimontana Festival in Rome and three mini festivals in the agency’s spaces in Berlin.

Antonello Marafioti has not yet released an album in his name. His dimension is that of live music, where he can musically process the energy he receives from the audience. However, he participated in the bassist Nesin Howhannesijan‘s album “Hattori Hanzo” and the “Fructus Spiritus” album by the Berlin-based group Takabanda.

Always in search of new acquaintances, he attended a training course as a sound engineer at the Wave Akademie in Berlin and founded the buenaondastudioberlin.

Another focal point of Antonello Marafioti’s work is the teaching of music and in particular of jazz.

“Jazz, like any true artform, transcends all ethnic, geographic and religious borders.” 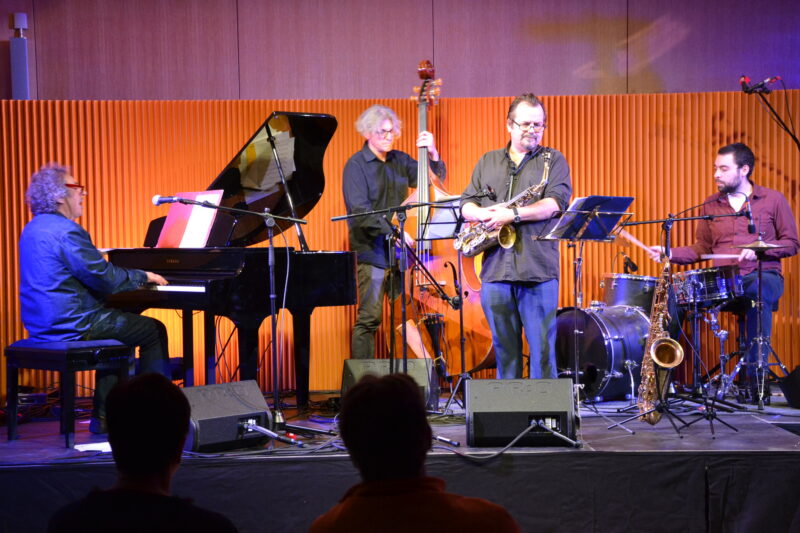 At the beginning of his career Antonello Marafioti was very much influenced by the music of Jazz pianist Thelonious Monk. That’s why he got the nickname Anthelonious.

At this time the Anthelonious Jazz Quartet is composed by

Blues On is a 12 bars blues in F in the mood of Thelonious Monk. The first 8 bars are based on bc ef, heard on a solo of Thelonious Monk on his composition “Well you needn’t“, the last four work on the whole-tone-scala, a typical characteristic of Monk.

New Days is a Bebop composition based on the changes of the first part of the Henry Mancini‘s song “The Days Of Wine And Roses“. The typical Bebop melody was written thinking of Lee Konitz and Lennie Tristano.

Spring Leaves is a kind of evolution of “Autumn Leaves” of Joseph Kosma. The modal treatment takes it very far away from the original inspiration. The form is AABCA. The “C”-section shows a typical hard bop line on the changes of Giant Steps by John Coltrane.

Wintertime was composed in the same periode of Spring Leaves. It is an evolution of “Summertime” by George Gershwin of wich it preserves the form ABAC. The “A”-sections are characterized by a “New Orleans”-rhythmed Bb7; In the “B”-section we can find Coltrane changes again.

Walking On was inspired by the use of mordents of Mal Waldron, a Jazz pianist Antonello Marafioti met several times and respects a lot. The last two bars of the 12-bars-form are always a collective free improvisation and remind to some Mingus sounds.

A Presto Vladi is a ballad wich was originally composed for the successful movie “Goodbye Lenin“, where it is played as a Bossa. Also in this tune you can recognize several influences wich don’t take the originality of the composition. Form AABA. The “A”-section starts similar to “Peace” of Horace Silver. Like “Body and Soul” the bridge rises a halftone up.

This group is a variable trio, to wich collaborate different musicians, each one with his own flavour.